Empedocles believed that sight was created by the fires of Aphrodite being lit in your eye. While the sentiment is poetic enough, it just shows the degree to which Aphrodite has always been associated with image, sight, viewing and the gaze.  For about 25 years my Aphrodite statue has been the central focus of my primary household altar.  Of course it makes sense to have a stylistic representation of her as the centerpiece of a sacred space.  Statues and iconic representations of deities have historically served several purposes.  Theurgically statues and icons hold the deity.  The statue was the deity made manifest and thus became the place where the dedicant would place their offerings, petitions and devotions.  Today, most people use sacred icons in the same way.  They are not only a focus for ritual activity, but for me images of Aphrodite have always served as a reminder of her presence in my life and also to try to live her work. My altar to her normally holds things I am concentrating on magically, things I find beautiful or meaningful, and some relics from her temple in Paphos.  In the past my altar has been elementally themed with watery colors and seashells, but in the past few years I have shifted to a more planetary asthetic to reflect a Luciferian current as well (more about that in a future post).  Sometimes for particular workings I have switched it out completely.  Once I did a really super black Aphrodite altar with black roses and a veil.  I was in a bad mood.

But over the past six months or so I have been thinking a lot about the form of Aphrodite and what it means to work with images of her.  I want to address this in a number of contexts eventually, but let’s just start with the altar since it is ubiquitous for many people who have some sort of deity practice. Aphrodite’s earliest temple on Paphos didn’t have any sort of statue that looked like her.  The centerpiece was a large, black almost pyramidal stone. 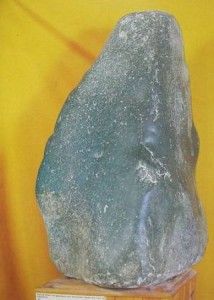 Conical Stone of Aphrodite in Paphos

The stone has remained in Paphos for visitors to see, but you can also see images of the stone on Roman coins. 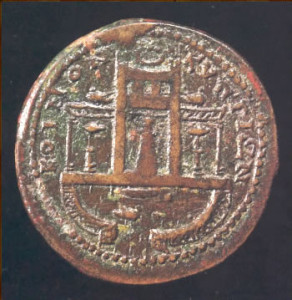 This stone was old and revered, and may represent one of the longest continual sites of worship in the ancient world.  No doubt it held her power for people.  While in many ways I find the transcendence of the Neoplatonists a bit annoying, they did have some interesting things to say about the pitfalls of embracing the icons of beauty too closely, for if we do so, we only have the image of love, not love itself.   If I see Aphrodite on my altar every day, does that in some way inhibit me from seeing her in myself?   Where do I put the locus of agency? Perhaps a stone is not a bad approach.

And another tricky thing about Aphrodite is that, let’s face it, most images of her by necessity represent very normative standards of beauty.  Does the statue help me to see that beauty in myself, or do I transfer the ideal to her, or someone not me? Can having such a central reputation of idealized beauty as the visual focus of my sacred space inhibit the potential for me to see beauty in all things, even if only a little bit? Now, these questions get us into some really interesting territory about the sacrality of objects, the locus of power in a deity relationship, and what the purpose of representative deity iconography is for devotion and practice.  If you are a hard polytheist, you will have very different answers to these questions, and that is ok by me.  I think that regardless of your answer, these questions are well worth considering so that your practice is in alignment with your spiritual goals.  For me, the goals of deity relationship are to artfully empower myself to embody a set of ethics and values that I think are good and useful in the world.  So, it is prudent for me to revisit parts of my practice, such as having a statue on my altar, to consider the ways in which they may or may not be serving me.  It may also be that when I started the Aphrodite project so many years ago, that the role of the statue played a very different part in my understanding of deity and of my own Pagan identity.  I know I have certainly changed and developed, and I think these things need to be retheorized from time to time in accordance with our own changing understandings.

So I think I do want to redo my altar.  Not sure how yet. Watch this space.

2 thoughts on “Considering Aphrodite on my Altar”

Blue is, in no particular order, an atheist, Thelemite, Chaote and magic(k)ian, who has been building a relationship with Aphrodite and her series for 25 years. Practice and labels need not be congruent. Enjoy!